A few year ago, while a guest at the New Orleans Marriott, I was a lucky recipient of unexpected goodies. 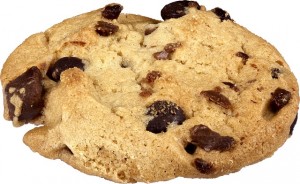 About thirty minutes after check-in, there was a knock at the door. When I opened it, there stood a smiling Marriott associate. She had a bucket filled with ice-cold skim milk and a large platter of chocolate chip cookies. These were monsters. Each, about the size of a Volkswagen hubcap!

They stared at me through their cellophane wrapping. Teasing me. Tempting me to eat just one. Despite their seduction, I refused to fall prey to their menacing allure.

Later that evening, at about 11:30, I was pooped. It was bed time. But the cookies were now winking at me. Calling my name. Daring me to bust through what had been their impenetrable plastic protection. I still resisted. And remained awake for the next thirty minutes.

The cookies were no longer the enticement or the problem. Instead, it was my next door-neighbor.

The adjoining hotel room had at least four people. One was a child. They were loud, boisterous and having a ball. (Kinda like my family when we’re in a hotel room.)

I thought the revelry would subside. It didn’t. At midnight it was still going strong and the decibel level was rising. Okay, it was decision time. What do I do?

And boom, it hit me!

At 12:03 AM, I snatched the phone and called their room. A man answered with a sound of surprise in his voice. I said:

“Hi, I’m your neighbor. We haven’t met, but I can tell by the laughter and conversation, that you and your family are a lot like mine, you enjoy being together. And that’s great. Except, it’s really loud! Now, I would never ask you to do something for me, unless I first did something for you.

If possible, it would sure be appreciated if you guys could turn down the volume a wee bit. And in return, to say thanks, I’d like to provide you and your family with a platter of homemade, baked today, sealed in cellophane, Marriott chocolate chip cookies. Each, about the size of Rhode Island. I’ve already placed them outside your door.”

His response, “Okay.” I heard the door open. The door close. And then…

Nothing. Just the sound of silence.

– when negotiating, provide an irresistible offer

– delay your own gratification, your immediate reward may have greater value and significance at a later time to somebody else (if I gobbled too early, my bargaining chips, {no pun intended} would have been eliminated)

– if you expect to get something, be willing to give something in return

– take action first, especially when it gives the other party an advantage, (i.e., they had the cookies before I had slumber

– make your communication memorable and meaningful, (gotta believe these folks told others, “You can’t believe what happened to us!”)

– be involved, don’t delegate delivery of the message when you’re the stakeholder and most affected by the outcome of another’s decision