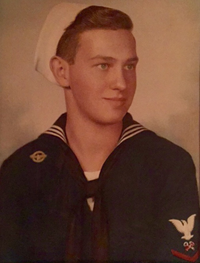 His journey began in 1945. He was a recent high school graduate and now an 18-year-old “Navy Man.” A Petty Officer Third Class. Yet little did he realize, he’d receive a hero’s welcome for his service as a World War II veteran, 70 years later. It was September 2nd, 3:05AM. Dad slowly entered my car. We left in darkness.

Over the decades, Dad and I have spent lots of memorable days together. Yet none like this. His Honor Flight Chicago trip as a World War II vet had officially begun. (Honor Flight Chicago’s mission is simple: “To thank and pay tribute to America’s war heroes, by bringing them to Washington, D.C. for a day of honor and remembrance at no cost to them.”)

First stop, Chicago’s Midway Airport. 3:40AM, Dad carefully exited my car. Orange-shirted volunteers gently helped him into one of his many “chariots” for the day. A smooth-movin’ wheelchair!

I parked my car and headed into Midway to join the fun. (I spend lots of time in airports. Yet never have I seen such excitement and joy…in any airport, especially at 4AM!) Hundreds of volunteers were there to “serve” veterans. For they had served America, its citizens and future generations.

I donned my green Honor Flight shirt. I was now an “official guardian.” And I’d have the privilege of being Dad’s guardian for the day. Dad always encouraged and politely pushed me to succeed. Yet now, I’d be “pushing” him and his wheelchair, through crowded airports, around memorable D.C. memorials and up countless ramps. 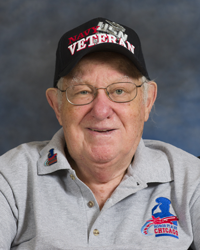 We breezed through a special security line and once at the gate for our Southwest charter to D.C., we were treated to coffee, donuts and “time travel.” A live-band, featuring “Andrews Sisters” impersonators belted out hits from the 1940s. While volunteer dancers in 40s garb danced with veterans.

When I fly for business, clients ask, “How was your flight?” I typically reply, “Perfect! We took off, we landed. Uneventful.” By that aviation standard, this “flight” was also uneventful. But not the “greeting!”

As we entered the Dulles terminal, each vet was greeted by hundreds of volunteers, well-wishers, adults, children, high school teams and admirers, who thanked the vets for their courage and commitment with an extended handshake, a warm embrace, a high five, a huge smile or a simple kiss to the cheek.

The enthusiastic crowd showed their gratitude with signs, cheers and the always powerful, “Thanks for your service.” (It was one of many times during the day, when I wish I had a box of Kleenex with an automatic dispenser!)

Eventually, we exited the terminal, (still to thunderous applause), and headed to the next mode of transportation, our gleaming, five-strong “bus brigade” – Red, White, Blue, Green and Gold. (It’s also pretty easy to navigate Virginia and D.C. traffic, with a police escort!) 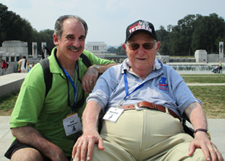 It included a special ceremony for the vets with a color guard, members of the U.S. Marine Corps band and a personal greeting from Senator Bob Dole, himself a WWII vet. (And ironically, the date of our trip, September 2nd, was the 70th anniversary of V-J Day, when Japan “formally” surrendered aboard the U.S.S. Missouri, anchored in Tokyo Bay.)

D.C. was stifling hot. Yet there was never a complaint. About the heat. The lack of sleep. The pace of the day. It was now easy for me to understand, why this group of men and women, have been called, “The Greatest Generation!” Being with them and Dad, was a day of significance.

It was late afternoon, and for the final time, almost 150 haggard yet happy vets, volunteers and guardians boarded our five buses. Off to Dulles! As we gathered at the gate for our return flight home, there was an audible buzz. Folks reflected on the day with new friends. They swapped stories about life during and after the war. And there was 1940s music, with a local dance group “cutting the rug” with women in polka dot dresses and men in zoot suits!

Finally, Southwest charter 8248 was headed back to Chicago. The overhead lights dimmed. Exhausted eyes closed. Proud, but pooped heads sunk into slumber. Until…

One hour into the flight, the plane’s lights abruptly began to shine. They were accompanied by a loud declaration over the plane’s PA system, “Mail call!” The vets were in disbelief. And awe! 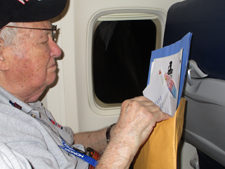 Each received a 9×12 envelope with their name on it. Inside; cards, letters, faxes, e-mails, crayon drawings, original artwork…from family, friends, business associates, local students and even the owners of Chicago’s professional sports teams. Each message offering sincere thanks, admiration and love to the vet for their service!

8:41PM, we landed. As we taxied toward the gate, a surprised vet exclaimed, “Is it raining?” Nope! Yet there was water raining down each side of the plane. The vets were receiving “salutes” from the Midway Airport Chicago Fire Department’s water canons! As the water streamed, so did the tears!

As vets de-planed, they were greeted by applause and cheers. And that was just in the jetway, from Southwest crew members, Midway employees, Honor Flight volunteers and members of the Chicago Fire Department.

If the reception at Dulles was remarkable, the welcome at Midway was incomprehensible. As each vet exited, he or she was greeted by saluting active members of the U.S. Navy, who then became a vet’s official escort. I relinquished Dad’s “pushing priorities” to the U.S. Navy’s Jeremy Butler. I proudly walked about five feet behind, capturing pictures and video. Hundreds of enthusiastic well-wishers whooped, hollered, clapped and repeatedly told each vet, “Thanks for your service!” (The musical accompaniment was bagpipers!) 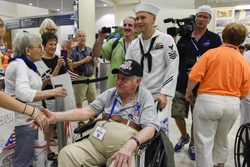 And when you thought the raucous welcome couldn’t get any better, it did!

Many feverishly waved American flags and held up signs, banners and posters, with a vet’s picture from the 1940s and simple messages of love and appreciation. Folks continually reached over the security fence or barrier to thank each vet for their service. And then…

Tears swelled in Dad’s eyes. To my knowledge, yet his surprise…

He looked up, to his right, lining the parade route…were my Mom, my family and our friends, cheering, applauding, hugging, kissing and yelling, “Welcome home Irv!” / “You’re a hero Dad!” / “Way to go Papa!” (Dad said he now expects this reception, every time he flies!) 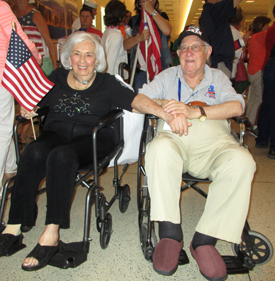 If you’re a World War II vet or know a vet who’s interested in this powerful and unforgettable day of remembrance, (or you’d like to volunteer), hop online to see what honor flights are available in your region of the United States. And if you’re in the Chicagoland area, simply head to honorflightchicago.org or call 773.227.VETS (8387)

Mom, we brought your Navy Man home safely. Dad, thanks for serving. You’re a hero. I love you!