For those of you who have heard me speak before, you know I’ll often pose to a group and each participant, three simple yet powerful questions, I call the world’s fastest-strategic plan: 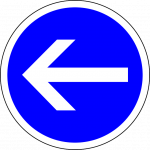 The “reality” of these questions was driven home years ago. It was September 18th, 2003.

My flight landed in Pittsburgh at 4:30 P.M. By 5:15 I was behind the wheel of my rental car. (By the way, how come when you rent a car, for the first sixty seconds you just sit there feeling stupid, trying to figure out how it works?!)

Before departing, I again glanced at directions that would take me to Indian Lake, Pennsylvania. A trip I was told, that should take ninety minutes.

Confident and prepared, I pulled out from beneath the protective cover of the parking garage.

Immediately, I was greeted by the wrath, fury and aftermath of Hurricane Isabel. A torrential rainstorm pounded the windshield. Fifty miles-per-hour winds shook the car.

Since I had been on-the-road for an exhaustive thirty seconds, thought it would be a good time to pull over for a break!

Before I headed for the turnpike, I called the resort to request they tell my client I had landed and was on my way. And to confirm the directions a hotel employee had given me earlier in the week.

Patty, who answered the phone this time, said, “Oh no, those directions are all wrong. Here’s what you oughta do.” She then gave me a new game plan.

With Patty’s guidance, I attempted to reach the turnpike. But traffic was at a standstill. I called Patty again. She said, “Okay, change of plans.”

That became a familiar and often repeated retort.

Patty’s ongoing changes and suggestions would feature; a turnpike, highways, side roads, twisty paths and blind curves. All being navigated in a downpour moving from left to right.

And her directions didn’t always include street names or highway numbers. Instead, they began with, “Look for the sign that says Shanksville and hang a left.” Or, “After you pass that funny-looking house on the right, get ready for a series of big bends.”

Patty greeted me with, “I’ve spent more time talking to you, than all of my previous husbands!”